Guess background color of of this page in 6 tries.
The catch? Your guesses are in hexadecimal.

Need some help getting started?

Made over the course of a month for the 12th Eggplant Podcast Community Game Jam (Theme: Fun with Hexes).

Special thanks to: Mackenzie Ito, Alex Pait, and the Eggplant Discord Community for the guidance and motivation <3

Having trouble playing on mobile?  Try playing the game here.

Have you considered adding Dungleon’s “+” hint for “yes, this is an F, but there are also more Fs”?  Marking up the keyboard would also be nice.

Thanks for the feedback!  To be honest I hadn't actually gotten around to trying Dungleon myself yet... The thought of adding a hint for multiple characters never really even crossed my mind.  I'll look into that.

Getting the Wordle-style keyboard in place unfortunately got put on the back-burner for me in favor of getting other things like the pop-up victory/loss screen in place (I'm a bit of a novice with front end development, these things all took me longer to figure out than expected).  I ended up running out of the free time I thought I had before the jam ends.  It's definitely my top priority though for my next update, hopefully I'll have it implemented in the next week or so.

Thanks again for playing and for the feedback!

I think this is a really cool idea, though I think that six guesses is a little short when there are 16,777,216 possibilities.  I mean, obviously you're not guessing as blindly as you are with Wordle; but honestly once I have #49D2Bx, there are roughly sixteen indistinguishable possibilities left.  (Or it could just be me--I admit I'm not great with colors.  Maybe six guesses is perfect for people who know what they're doing!  But visually distinguishing #49D2BB from #49D2BD is a lost cause for me.  Not that that's stopping me from playing repeatedly.)

Thanks for playing!  I do agree with you, as the game stands there's far too much guesswork involved.  Upping the number of guesses you can make would be a good solution, but I had really hoped I could make some improvements to the hint system that cuts down on the guesswork.  Something along the lines of "Yes, this character is in the solution, but it belongs somewhere in the Red hexadecimal pair."

I unfortunately just ran out of time to implement it and test it out before the jam ended.  Hopefully I'll have something like this in the game in the next week or two, but if it doesn't work out I'll definitely look at upping the number of guesses you can make.

Thanks again for the feedback!

This is lots of fun! I think it's possible to get it in 6 guesses even knowing nothing about hex as long as you guess smart, at least most of the time. I've managed to win 10 out of my last 11 attempts (and I'm colorblind 😅). 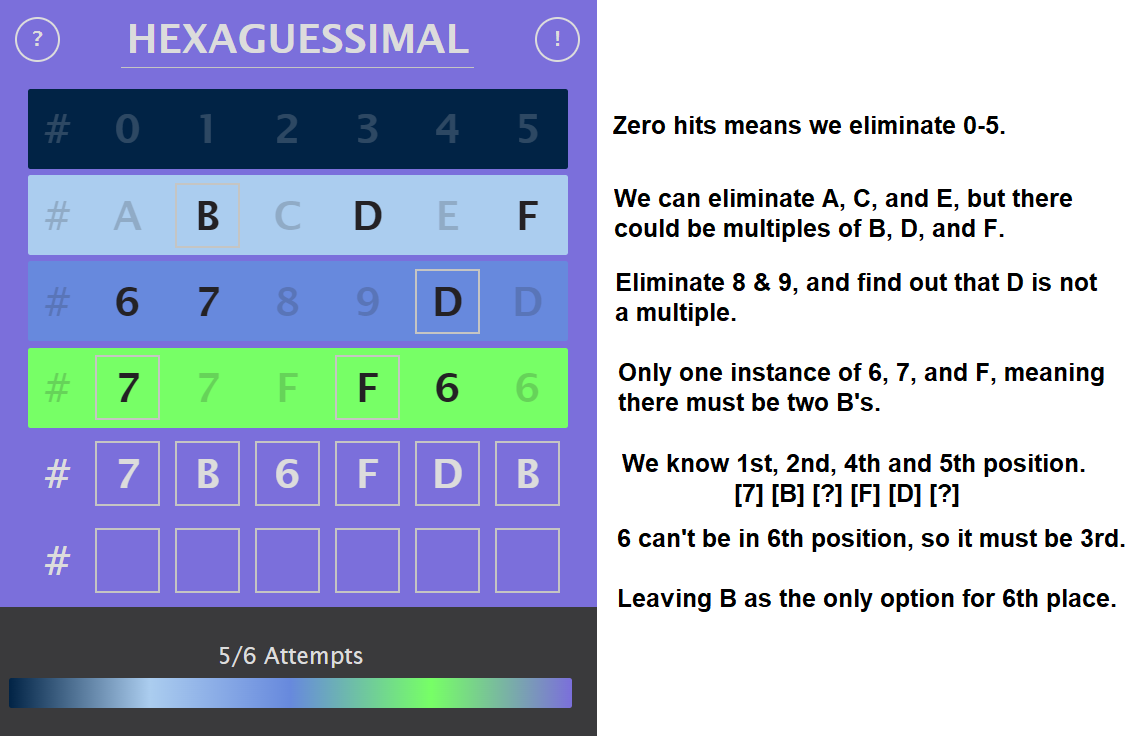 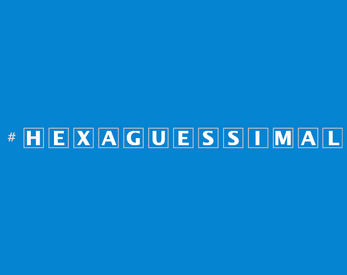